Blaine is a Managing Director of Mynatt Martínez & Springer P.C. He was born in Albuquerque and was raised in the South Valley. He attended the University of Washington on a swimming scholarship after graduating from Rio Grande High School. He graduated in 1993 with a Bachelor’s degree in Environmental Law. He then returned to Albuquerque and obtained his Juris Doctorate from the University of New Mexico School of Law in 1997.

Blaine has been recognized by a number of trade publications and institutions including A.M. Best, the American Society of Legal Advocates. Blaine also earned the prestigious AV Preeminent peer review rating from Martindale Hubbell. He is a Fellow of the distinguished Litigation Counsel of America and earned the distinction of being elevated to the Order of Juris in recognition of having tried over fifty cases before a jury.

Damian is a Managing Director and Vice President of Mynatt Martínez & Springer P.C. He is from Las Vegas, New Mexico and graduated from New Mexico Highlands University in 1998 with a Bachelor’s of Social Work. He obtained his Juris Doctorate, cum laude, from St. Mary’s University in 2001, where he was a member of the Phi Delta Phi and John M. Harlan honors fraternities. Prior to joining the firm, Damian was a Captain in the United States Air Force Judge Advocate General Corps. He was also a Special Assistant U.S. Attorney for the District of New Mexico and the Northern District of Texas. Damian was appointed to the Board of Regents of Northern New Mexico College in 2015.

Damian confines his litigation practice primarily to the defense of municipalities and police departments from claims of excessive force and constitutional violations arising under the color of both state and federal law and insurance defense. He has obtained multiple total defense verdicts on behalf of Otero County, the City of Las Cruces, and other government entities in high-profile law enforcement defense cases. Damian has also successfully resolved multiple matters through summary judgment and qualified immunity. Damian has fully litigated thirty-eight (38) jury and bench trials. Damian’s litigation experience also includes appellate practice. He has been lead counsel in several appeals and argued before both of New Mexico’s Higher Courts, the U.S. Court of Appeals for the Tenth Circuit, and the U.S. Court of Appeals for the Ninth Circuit. 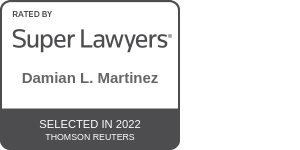 Brad began his career as an attorney in 2007, representing the State of New Mexico as an Assistant District Attorney in the Third Judicial District. In 2010, Brad joined the firm as an Associate Attorney and is now a Shareholder and Director. In his civil practice Brad has built on the firm’s core practice areas including the representation of numerous government entities across Southern New Mexico, both as general counsel and in litigation. More recent examples include the direct representation of the City of Sunland Park, and the defense of New Mexico public schools and counties in tort, civil rights, and employment cases.

Brad also defends privately insured individuals and companies in both New Mexico and Texas, in a variety of cases including premises liability, personal injury, construction defect, auto and trucking cases. Brad has tried over twenty (20) cases to the jury, and has significant experience in the appellate courts, both state and federal.

Ben is a native New Mexican. He grew up in Ciudad Juarez, Mexico where he learned to speak, read, and write Spanish fluently. These language skills have become indispensable when communicating with the firm’s Spanish-speaking clients. He received his B.A. from New Mexico State University in 2008 and his Juris Doctorate from the University of New Mexico in 2012. He was admitted to the State Bar of New Mexico in September 2012.

Ben sits on the Board of Directors for University Presbyterian Church. He also provides a significant amount of pro bono work for non-profit entities.

Sara grew up in Texas. She attended Texas A&M University where she graduated with a Bachelor’s Degree in Economics in 2001. She then attended South Texas College of Law in Houston, Texas and earned her Juris Doctorate in 2004.

While living in Texas, Sara began her legal career with a small firm focusing primarily on family law, criminal defense, probate and estate planning, and civil litigation. Her family moved to Colorado where she worked as a Claims Examiner for the U.S. Department of Labor, followed by a move to California, where Sara spent time raising her sons and volunteering in their various school and extracurricular activities. Prior to joining Mynatt Martínez & Springer P.C. in 2016, Sara worked as Special Assistant Attorney General for the New Mexico Child Support Division.

Sara currently assists the firm’s directors in handling a variety of litigated and non-litigated matters for insurance companies, government entities, municipalities, and counties. She is involved in all aspects of litigation including discovery, motions practice, oral arguments, and hearings.

Alan currently assists the firm’s directors in handling a variety of litigated and non-litigated matters for government entities, quasi-public agencies, municipalities, commercial entities, and counties. He is involved in all aspects of litigation including discovery, motion practice, attending and arguing at hearings, and trials.

Alan is proud to be an Eagle Scout in the Boy Scouts of America and a believer in the value of community service. After high school, Alan served a two-year mission in Italy on behalf of his faith. During law school, he mentored local fifth graders, sharing with them the value of educational pursuits. He also acted as President of BYU’s chapter of the J. Reuben Clark Society, an organization dedicated to promoting fairness and virtue founded upon the rule of law through public service and professional excellence. Here in Las Cruces, Alan works closely with the youth in his religious congregation.

During his years of private practice, David has been involved in virtually every aspect of civil litigation, including slip-and-fall claims, automobile accidents, insurance defense, commercial litigation, and construction-based litigation.